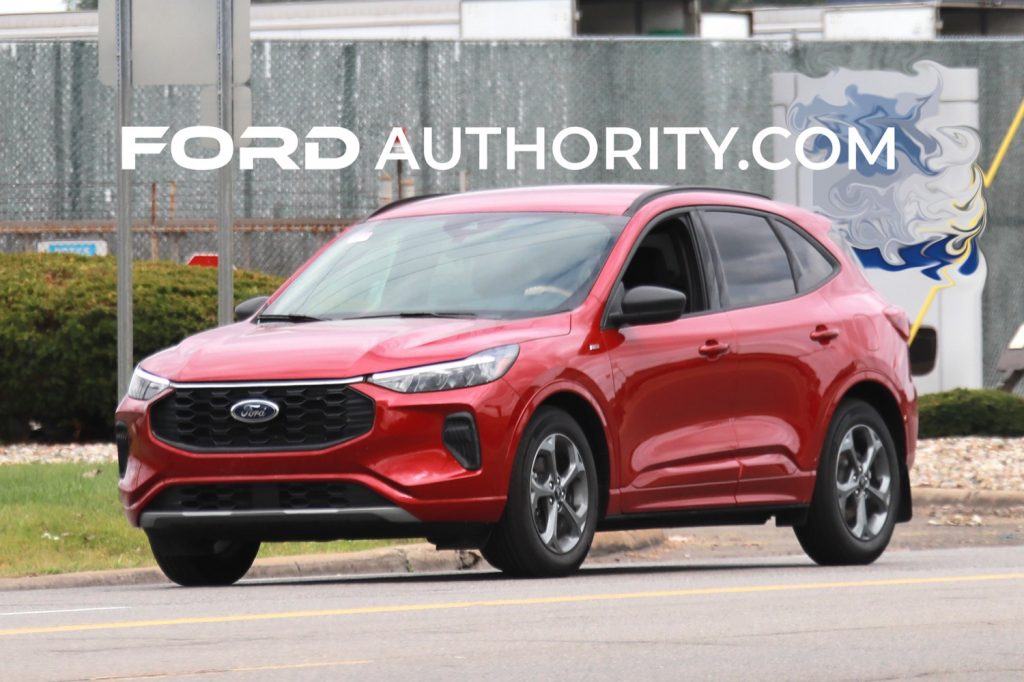 Ford Authority has already seen the 2023 Ford Escape out and about, snapping photos of several variations of the crossover before its official reveal, which will likely happen this month. We spied the refreshed 2023 Ford Escape uncovered for the first time back in June, followed by the 2023 Ford Escape Active under a week later. Since then, photographers have also spotted the 2023 Ford Escape PHEV, giving us a good look at the plug-in hybrid crossover without heavy camouflage. More recently, a 2023 Escape ST-Line crossed in front of our cameras wearing a striking coat of what appears to be Rapid Red paint. 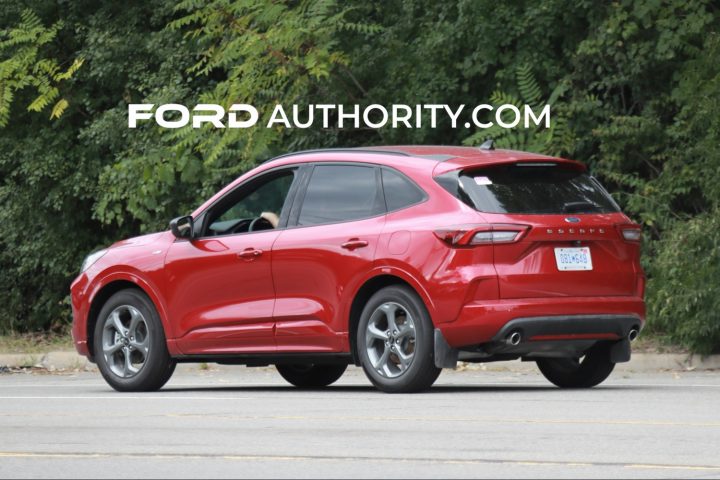 This Escape ST-Line is adorned with the corresponding ST-Line badges, which are affixed to the front fenders. Its wheel well covers are painted the same color as the body, lending a monochromatic look to the refreshed crossover, much like the first one we spied back in early July.

As a reminder, the 2023 Ford Escape ST-Line should offer all the styling cues seen on the ST models, but does not bundle the performance upgrades with it. It exists to answer the desires of customers who like the look of the ST, but aren’t necessarily keen on paying the extra costs associated with it, or don’t wish for the higher powertrain output. An Escape ST-Line would be the only vehicle in The Blue Oval’s lineup to not feature a true ST variant alongside it, should Ford opt not to introduce a Ford Performance enhanced model to complement it. Inside, the refreshed 2023 Escape boasts a larger touch screen for the infotainment system along with other cabin changes. Additionally, the forthcoming model sports a revised set of taillights that differ from the current model, giving it a bit of distinction from its predecessors. The upcoming Ford Escape will almost certainly feature the automaker’s Sync 4 infotainment system, as these features were already revealed for the crossover’s corporate cousin, the 2023 Lincoln Corsair. Additionally, the compact crossover is also expected to boast Ford BlueCruise hands-free driving technology at launch.

Meanwhile, as Ford Authority reported in June, 2023 Escape order banks are currently scheduled to open up in September, with production following a couple of months later in November.

We’ll have more on the 2023 Ford Escape soon, so be sure and subscribe to Ford Authority for more Ford Escape news and continuous Ford news coverage.