The 2023 Ford F-150 Raptor R is a force to be reckoned with, debuting in July as a supercharged, borderline overkill addition to the iconic F-150 range. As Ford Authority exclusively reported in 2019, an eight-cylinder powerhouse returned to the F-150 Raptor R line for the 2023 model year, harnessing the supercharged Ford 5.2L V8 Predator under the hood. Now that the gritty details about the Raptor R have been unveiled, Ford Authority reckons it’s time to pit it against the regular 2023 Ford F-150 Raptor.

Now, it’s interesting to note that the 2023 Ford F-150 Raptor with the 37 Tire Performance upgrade is quite similar to the Ford F-150 Raptor R in terms of dimensions. They have exactly the same wheelbase of 145.4 inches, and are both exactly 232.6 inches long bumper-to-bumper. However, the regular F-150 Raptor on 37s is slightly narrower than the Raptor R, but is .01 inch taller than its more aggressive counterpart. Both trucks boast the same 33.1-degree approach angle and 24.9-inch departure angle. 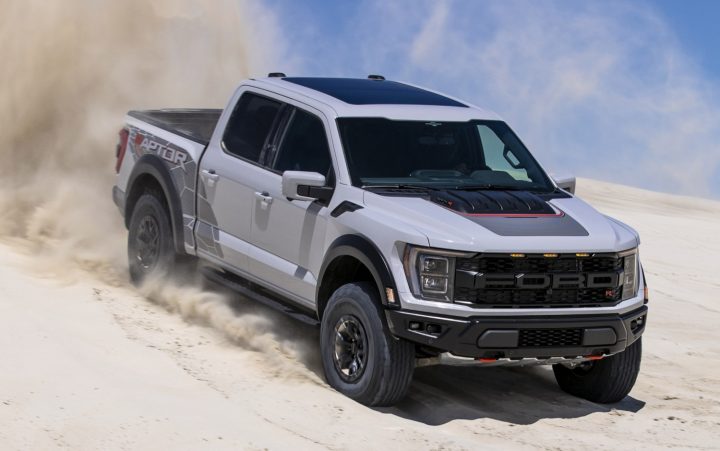 Of course, the most significant difference between the Raptor and the Raptor R is the engine strapped under the hood. The “regular” Raptor features the twin-turbocharged Ford 3.5L V6 EcoBoost engine, which produces 450 horsepower and 510 pound-feet of torque. The Raptor R, meanwhile, snarls to the tune of 700 horsepower and 640 pound-feet of torque, thanks to its 5.2L V8 Predator powerhouse. However, both trucks are united by the 10-speed automatic transmission that makes sure all that power meets the road.

With all that in mind, it’s certainly more cost effective to opt for the 2023 Ford F-150 Raptor with the 37 Tire Performance Package, since its exterior dimensions are almost identical to that of the range-topping 2023 Ford F-150 Raptor R and is over $26,000 less expensive. It simply depends on how much power a customer would like under the hood of their performance pickup truck, and how fast they really want to go.