Entering its third year of production, the Ford Mustang Mach-E remains a popular choice among EV crossover shoppers, as well as one of the more in-demand vehicles in that particular segment. As FoMoCo works to ramp up production, Mach-E inventory still hasn’t quite caught up with that demand, but this particular model is still selling in high enough quantities that it recently ranked third in terms of new U.S. EV registrations in the second quarter of 2022, according to Experian’s newly released Automotive Consumer Trends & Analysis Report. 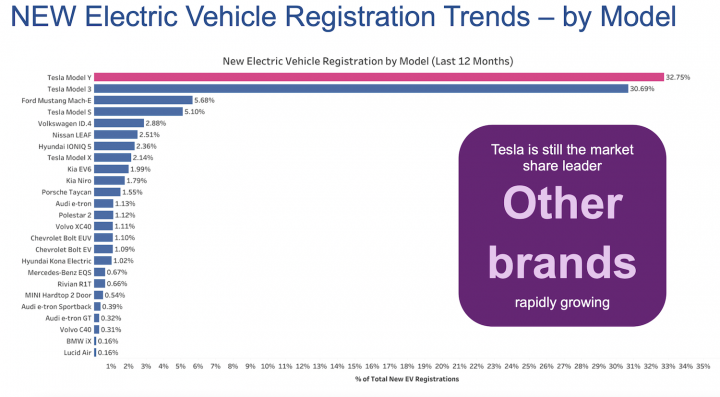 This trend is nothing new, however, as Ford Mustang Mach-E sales ranked third behind both the Model Y and Model 3 in the second quarter of 2022, as Ford Authority reported earlier this month. Mach-E sales increased 72 percent to 10,941 units during Q2, giving it an eight percent market share compared to the Model Y at 53,000 units and its 38 percent share and the Model 3, which sold 49,900 units for a 36 percent share. It is worth noting that year-over-year, the Mach-E gained market share while both Tesla models lost some ground.

Regardless, the Mach-E remains one of the top considered electrified vehicles on the market and is proving to be an appealing choice for a diverse group of customers. Couple that demand with low supply, and the EV crossover is also one of the most commonly marked-up vehicles on sale today, too.