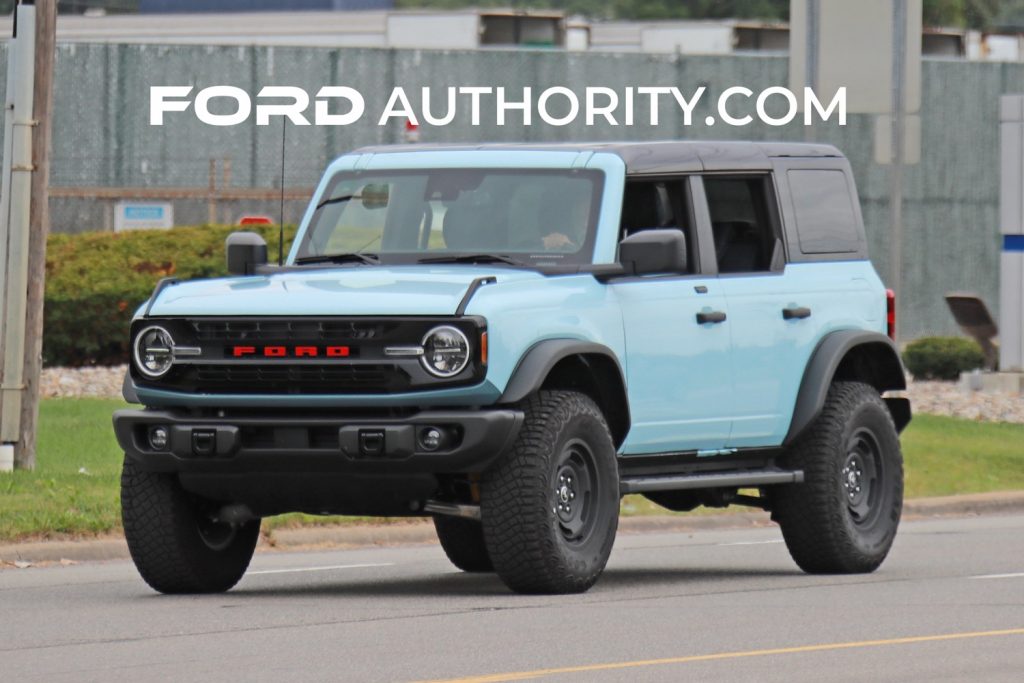 Prior to the unveiling of the 2023 Ford Bronco Heritage and Heritage Limited, Ford Authority spies spotted both two- and four-door prototypes of the new variants with black-painted details (not simply unfinished) such as the front grille and roof, rather than the Oxford White-painted pieces present on the production versions. Those same spies also spotted a Ford Bronco Sport Heritage Edition with a white roof and black components, and now, a 2023 Ford Bronco with blacked-out Heritage Edition parts for the third time – which begs the question – will Ford offer this combination to customers? 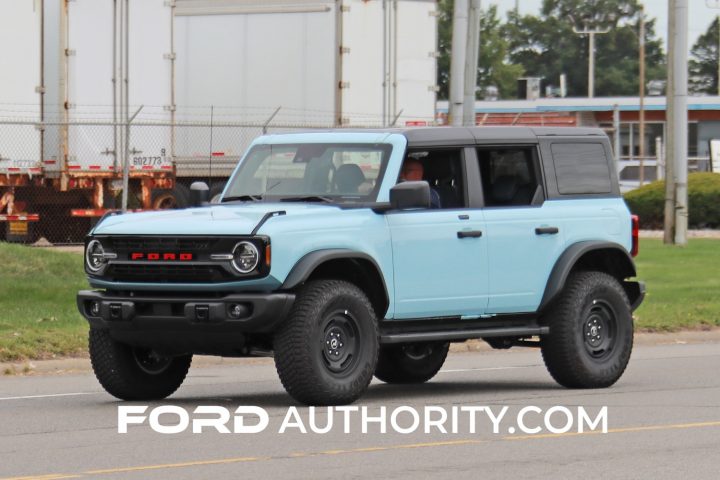 This 2023 Ford Bronco Heritage features the same Race Red “Ford” lettering in the front grille as all other Heritage models, yet the rest of its Heritage-based components are blacked-out. This includes the roof – which appears to consist of a mixture of black-painted and MIC components – front grille, and wheels, while the body side stripes are also missing from this particular four-door model. The SUV is finished in Robin’s Egg Blue, which is a color that’s exclusively available on the Heritage Limited Edition, and is the only color choice for that particular model until Yellowstone Metallic arrives as a late availability option for the 2023 model year. 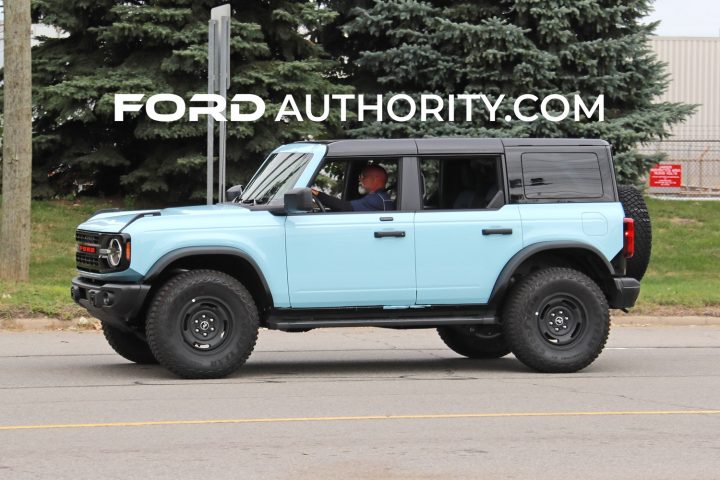 Interestingly, there are a few other unique features present on this particular Bronco – the rocker panels are blacked-out as well, though they appear to be taped, as some of its is peeling. Also, the sections beneath the taillights and above the rear bumper are blacked out as well. 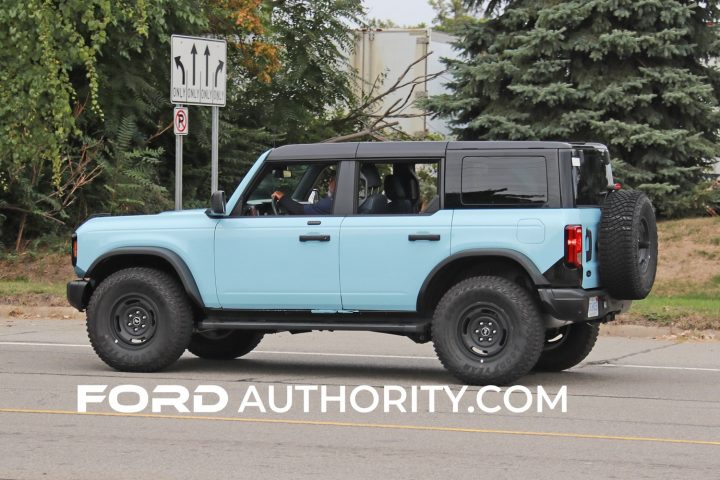 It’s worth noting that the 2023 Ford Bronco won’t be available with the long-awaited black-painted hardtop, as Ford Authority reported last month. Both Heritage Edition models – as well as the dual top option consisting of the Oxford White hard top and the black soft top – are also late availability. 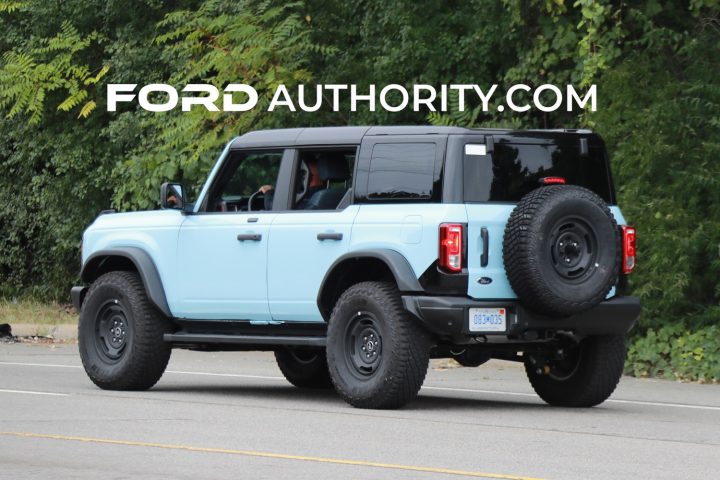 The Heritage Edition is available for retail customers to order, though order banks for all 2023 Bronco models are only open for carryover reservation/order holders. As for the Heritage Limited Edition, Ford will build just 1,966 units of the two- and four-door – for a total of 3,932 units – though all of those models are reserved to dealers and aren’t available for retail customers to order. 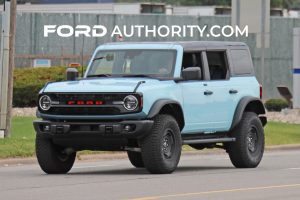 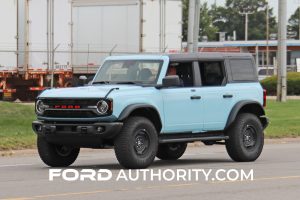 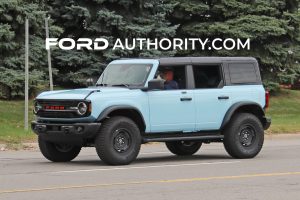 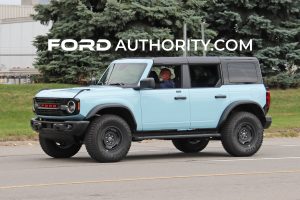 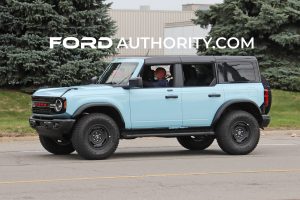 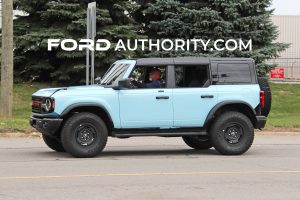 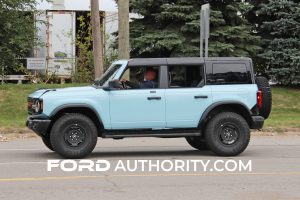 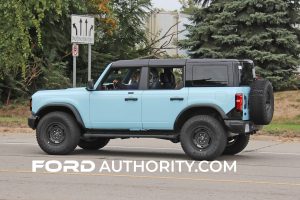 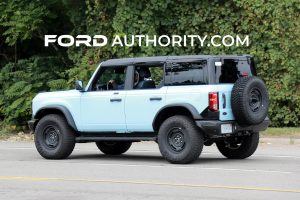 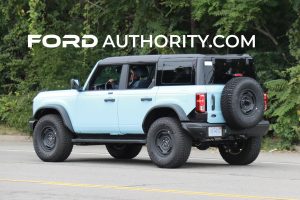