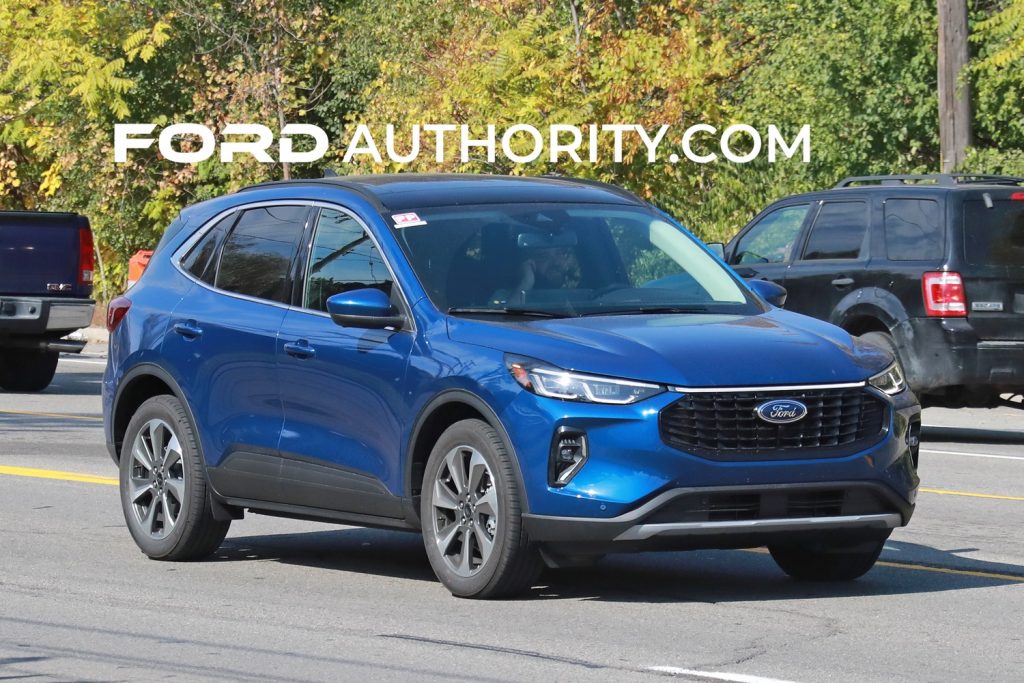 The 2023 Ford Escape officially debuted this week, but Ford Authority has reported extensively on the refreshed crossover and its many changes over the past few months. Those updates include a brand new trim level lineup, revised exterior and interior styling, a standard mini spare tire, an upgraded Co-Pilot360 safety system, and standard LED headlamps, to name just a few, though the 2023 Escape is also losing its MyKey feature and will not be available with Ford’s BlueCruise hands-free highway driving assist. To date, Ford Authority photographers have also spotted a number of refreshed Escape prototypes driving around – many of them wearing no camouflage whatsoever – and that’s also the case with this 2023 Ford Escape Platinum. 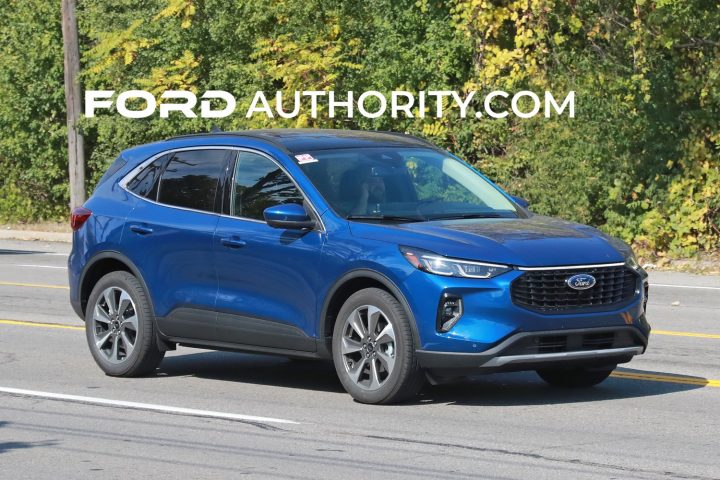 This 2023 Ford Escape Platinum is finished in Atlas Blue, showing off its revised exterior styling, which is particularly noticeable up front, where the crossover dons a more conventional, squared-off appearance when compared to the rounder, softer lines of the current model. The headlights are slimmer than the 2022 Escape’s, and there’s also a light bar that spans the gap between each. Wrapping up the front fascia are new upper and lower grille designs, as well as fog lamps on each side. This is the first time a Platinum has been spotted, as Ford only released and featured photos of the ST-Line and PHEV models upon the official reveal. 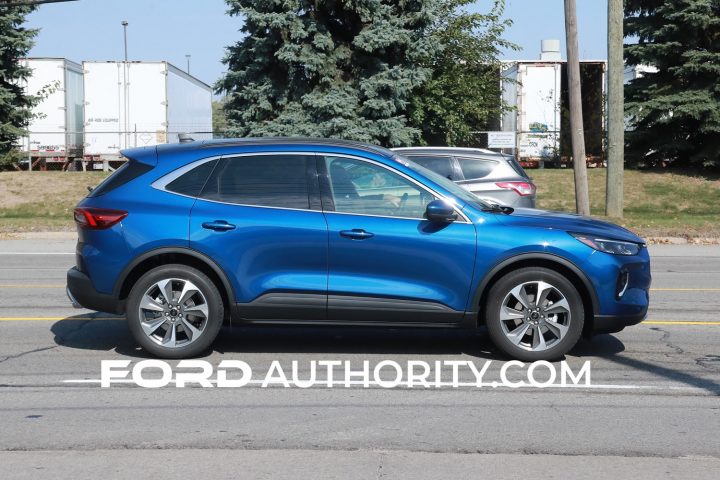 Moving down the sides, little has changed on the 2023 Escape, save for the new, 19-inch machined aluminum with Dark Tarnished-painted pocket wheels. Additionally the rear is equipped with revised taillights and a slightly refreshed overall appearance.

In terms of equipment, the 2023 Ford Escape Platinum offers up all of the same features as the new Active trim model, but adds a variety of big ticket items as well. On the outside, that includes the aforementioned coast to coast LED lightbar, LED fog lamps, front rain-sensing wipers, a chrome belt line molding, black roof-rack side rails, body color heated mirrors, the SecuriCode keyless entry keypad, and a hands-free, foot-activated tailgate. 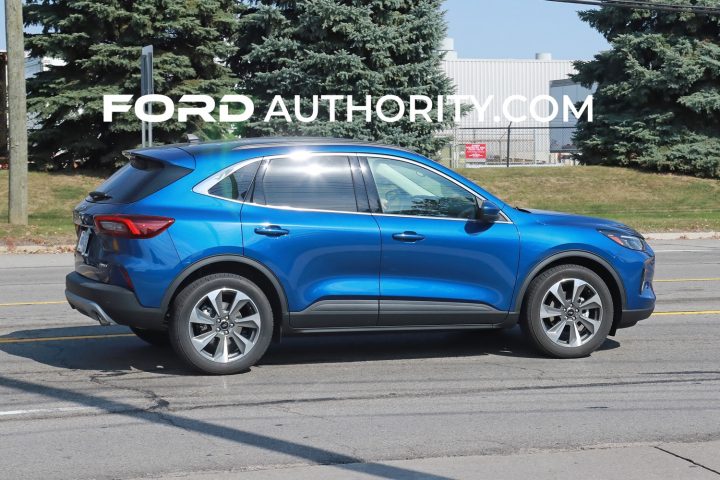 Inside the cabin, the 2023 Ford Escape Platinum is equipped with a heated steering wheel, ActiveX trimmed sport contour bucket seats, a 13.2-inch touchscreen with Sync 4, a 12.3 digital digital instrument cluster, and a wireless charging pad. Power comes from the turbocharged Ford 2.0L I-4 EcoBoost engine, which is only available with all-wheel drive. However, the hybrid powertrain is also optional on Platinum trimmed Escapes, and can be paired with  either front- or all-wheel drive. 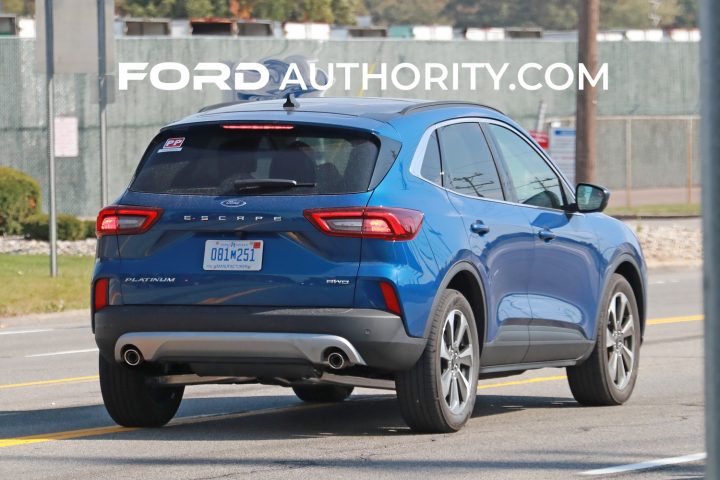 As Ford Authority reported earlier this month, 2023 Escape production at the Louisville Assembly plant was recently pushed back six weeks from its planned start on November 1st to December 12th, 2022, though order banks for the refreshed crossover opened up back in September. 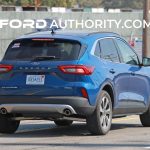 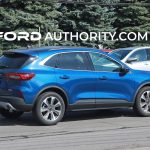 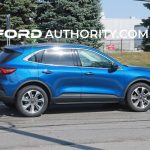 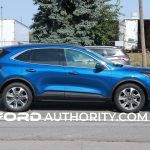 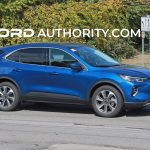 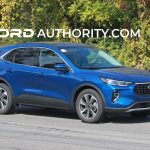 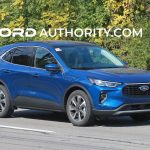 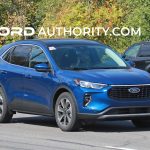