The all-new 2023 Ford Super Duty was just revealed a few weeks ago, and is currently scheduled to launch in early 2023. However, as has been the case for some time now, various supply chain constraints continue to plague automotive production in general, and the redesigned Super Duty isn’t immune to that phenomenon, either. In fact, many of the features and options packages the 2023 Ford Super Duty offers are late availability items, and won’t be available at launch. Now, sources familiar with the matter have told Ford Authority that the new Super Duty has dropped its Adaptive Steering System, too.

As Ford Authority reported back in 2020, the Adaptive Steering System was optional on Lariat and King Ranch trim level F-250, F-350, and F-450 2020 Super Duty models, as well as standard equipment on Platinum and Limited trims prior to the 2021 model year. For 2021, that system became optional on Platinum-trimmed trucks. However, for the 2022 model year, the Adaptive Steering System was offered as a standalone option on Lariat, King Ranch, Platinum, and Limited. Now, the feature is no longer available at all.

The Adaptive Steering System is designed to make it easier for drivers to maneuver a vehicle at low speeds while also making it more fun to drive and agile at high speeds. It accomplishes this by changing the ratio between the driver’s actions at the steering wheel and how much the front wheels turn. In vehicles without the technology, this is a fixed steering ratio. With adaptive steering, the ratio continually changes with vehicle speed, optimizing the steering response in all conditions. At lower speeds, such as when pulling into a parking space or maneuvering in tight areas, fewer turns of the steering wheel are required. At highway speeds, the system optimizes steering response, letting the vehicle react more smoothly to each steering input. 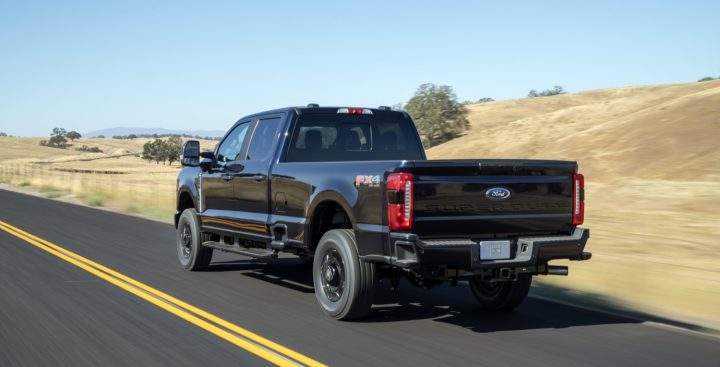 After its power, payload, and max towing capabilities were just revealed, 2023 Ford Super Duty order banks opened up today, October 27th, while production is scheduled to begin in early 2023 for XL, XLT, and Lariat trims in all cab configurations, engines, and series, from the F-250 up to the F-600. Meanwhile, Job 2 2023 Super Duty production for King Ranch, Platinum, and Limited trims will follow in the spring of 2023.