The refreshed 2023 Ford Escape was revealed a little over a month ago sporting a host of new or revised features – most notably, edgy new styling when compared to the more curvy, outgoing model. The front fascia, more specifically, is quite a bit different, with slim headlights flanking an oval-shaped grille that are joined by a light bar that spans the gap between them. As it turns out, the 2023 Ford Escape headlights tout some more interesting details too, as Ford Authority confirmed with Blue Oval engineers during the crossover’s debut event. The 2023 Ford Escape features a grand total of four different lights within its headlight cluster – daytime running lights/signature lights (DRLs) at the top, in addition to the aforementioned LED light bar. It’s also equipped with primary headlights on the outer edge of the cluster, high beams in the middle, and bending lights (which move while the vehicle is turning) inside the edge of the headlight cluster. It is worth noting that these four lighting elements are not standard on all trims, even though LED headlights are, however – just the ST-Line Elite and Platinum, while the four-element headlights are also optional on the plug-in hybrid as part of the PHEV Premium Package. 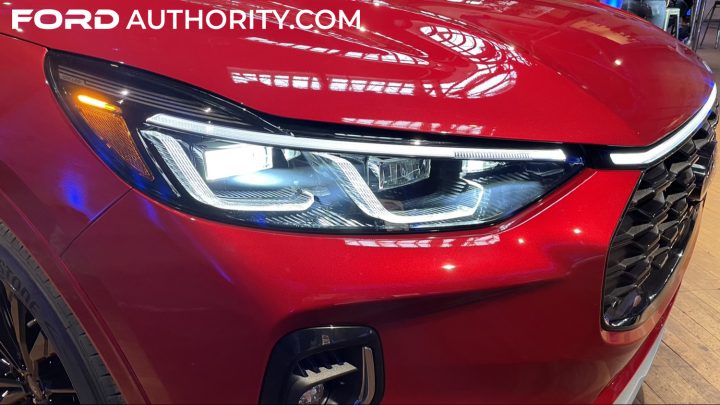 In addition to this new headlight design, the 2023 Ford Escape also debuts a brand new trim level lineup derived from customer feedback consisting of the Base, Active, PHEV, ST-Line, and Platinum. While the plug-in hybrid becomes its own entity, the Active and ST-Line are brand new, with the ST-Line being offered in three different trims of its own – ST-Line, ST-Line Select, and ST-Line Elite.

Inside the cabin, the 2023 Ford Escape offers a standard 8-inch infotainment screen or a larger 13.2-inch unit that’s optional on Active, ST-Line, ST-Line Select, and PHEV trims, as well as standard on the ST-Line Elite and Platinum. Both screens run Sync 4 with standard wireless Apple CarPlay and Android Auto, while a 12.3-inch digital instrument panel cluster is also available. While it utilizes Ford’s fully-networked vehicle architecture, BlueCruise is not available on the refreshed crossover, while it has experienced rather modest price increases compared to the outgoing model.