Since its launch, Ford’s BlueCruise highway hands-free driving assist feature has exploded in popularity, with with nearly 100,000 users signing up to use it as of the end of October. The automaker continues to develop BlueCruise and its Lincoln counterpart, ActiveGlide, and as CEO Jim Farley recently noted, a Level 3 version of the software is in development, too. However, with the recent announcement that Blue Oval-backed autonomous technology company Argo AI is shutting down, FoMoCo also admitted that it doesn’t feel like any sort of Ford full self-driving feature is on the way anytime soon, and that’s a fact that Ford North America Product Communications director Mike Levine recently confirmed via Twitter.

It’s not coming anytime soon. Just like Tesla but without taking $15,000 from your wallet for a product that’s stuck at Level 2. https://t.co/20Yc4dKsjw

When asked when we might expect to see a Ford full-self driving feature launch, Levine responded by saying “it’s not coming anytime soon. Just like Tesla but without taking $15,000 from your wallet for a product that’s stuck at Level 2,” taking a dig at the automaker’s chief EV rival in one fell swoop. Tesla CEO Elon Musk has long touted the company’s FSD software, yet it hasn’t quite come to fruition in terms of providing full autonomy. 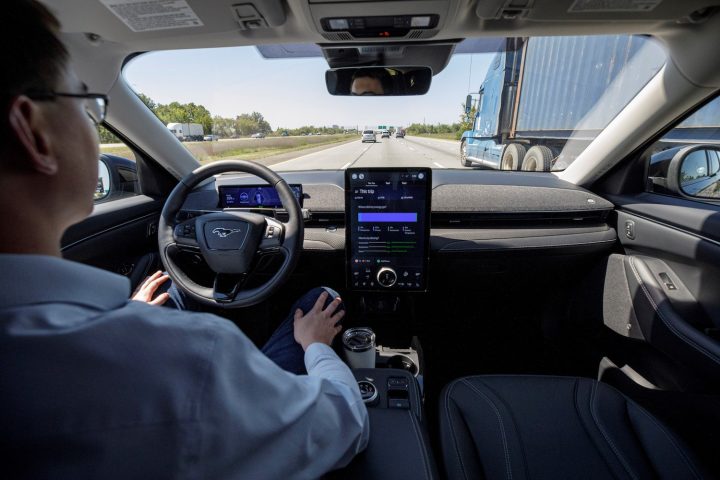 As Ford Authority recently reported, The Blue Oval plans to shift its focus away from Level 1 driving assist features and focus more on Level 2 and 3 autonomy, rather than Level 4, which is reserved for fully autonomous vehicles such as the ones that Argo AI was working on for commercial applications. Level 2 consists of partial driving automation, and is capable of controlling of steering, acceleration, and braking in certain situations, but the driver must still remain alert and ready to retake control if necessary. Level 3, on the other hand, is considered conditional driving automation and uses various driver assist systems and artificial intelligence to make decisions based on changing road and traffic conditions.

With Argo in the process of disbanding, the recently-formed Ford Next will take the reigns of developing the BlueCruise L3 system, as well as FoMoCo’s other autonomous tech development moving forward.

We’ll have more on Ford’s AV efforts soon, so be sure and subscribe to Ford Authority for 24/7 Ford news coverage.