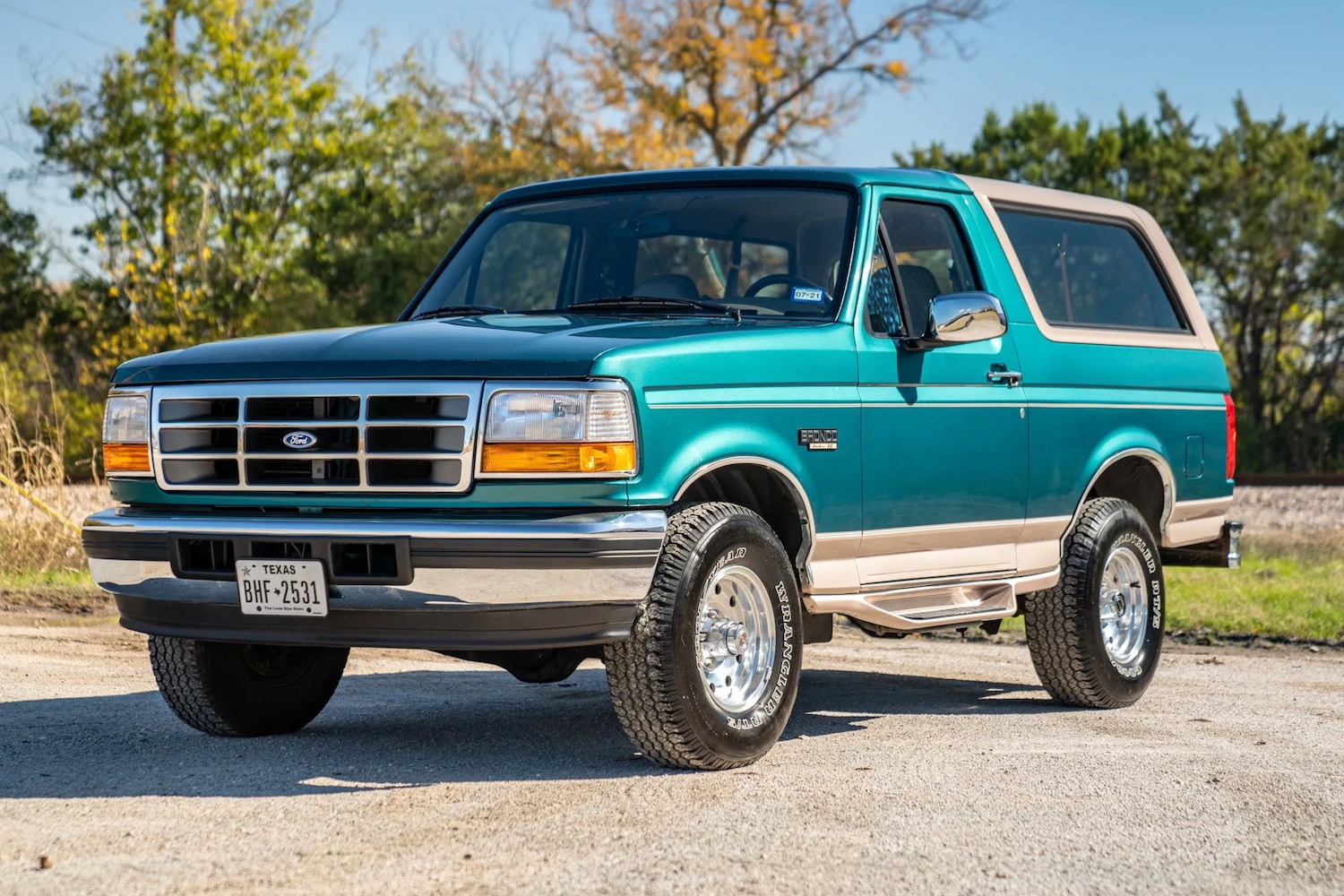 In recent years, the Ford Bronco has skyrocketed in value – regardless of generation – putting even newer, formerly cheap examples of the beloved SUV beyond the financial reach of many. That includes the fifth-gen Bronco, the last for a quarter-century until the sixth-generation SUV debuted for the 2021 model year. Thus, the fact that this incredibly nice 1996 Ford Bronco with just 5k original miles has ignited a bidding frenzy at Bring a Trailer should come as a surprise to precisely no one. 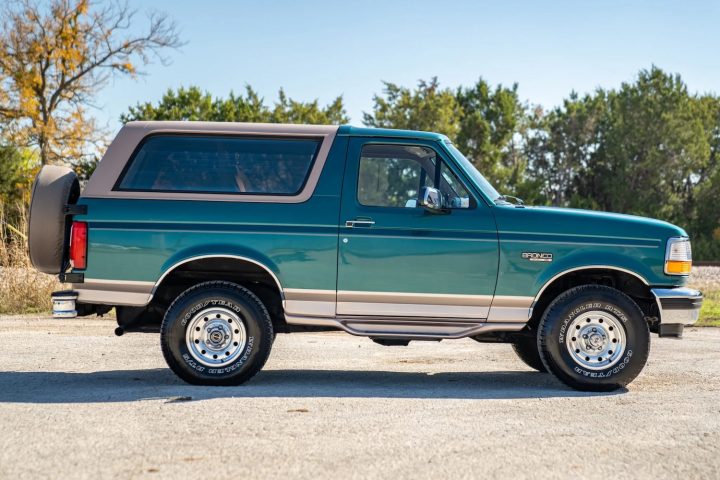 The fact that this 1996 Ford Bronco is finished in luxurious Eddie Bauer trim doesn’t hurt its appeal either, and it’s had just two owners over the past 25+ years, too. The exterior is unsurprisingly flawless, finished in Pacific Green with a Light Saddle removable hardtop, pinstripes, and lower body accents. The paint, along with the SUV’s trim and other brightwork, is in fantastic condition, as are the original 15-inch alloy wheels, which are wrapped with a set of 265/75 Goodyear Wrangler RT/S tires. 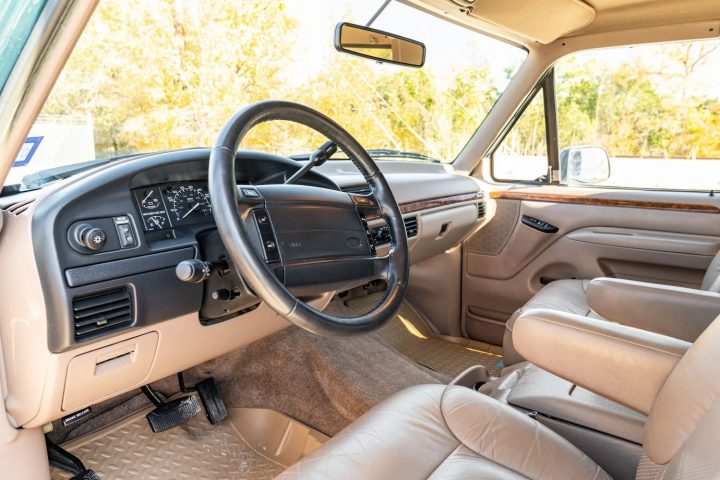 Inside the cabin, this particular Bronco features Medium Mocha leather upholstery with front seat power lumbar adjustment and a bevy of amenities including a leather-wrapped steering wheel, air conditioning, cruise control, power windows and locks, a center console, and an AM/FM CD stereo. 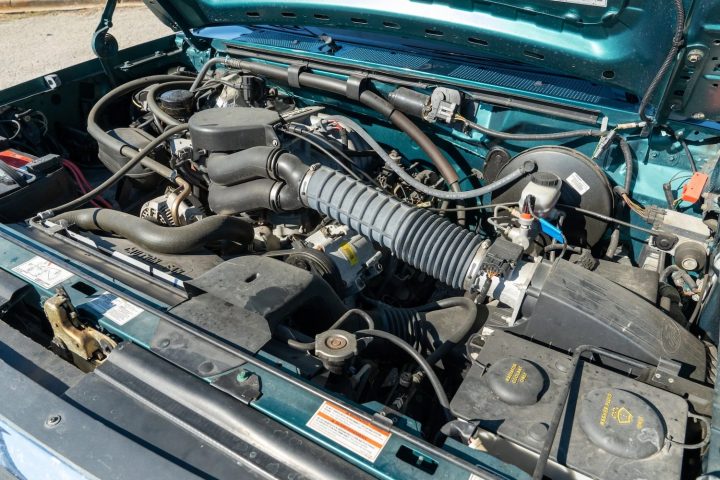 This fifth-gen Bronco is powered by the Ford 351 V8, which was originally rated to produce 205 horsepower and 328 pound-feet of torque and is mated to a four-speed automatic transmission and a rear end with 3.55 gears. Other notable mechanical features including automatic locking hubs, anti-lock front disc brakes, and the optional Trailer Towing Package. 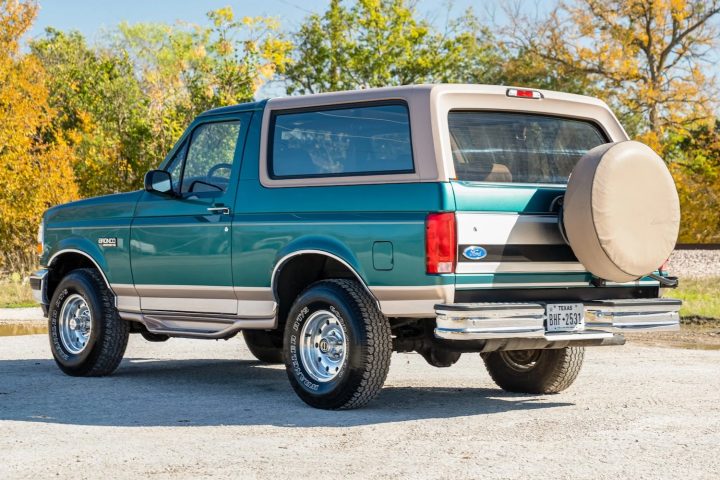 In fantastic condition with few notable flaws, it’ll be interesting to see just how much money this low-mile 1996 Ford Bronco rakes in at auction, as it’s already been bid up to $25,000 with eight days left, as of this writing.

We’ll have more cool auction listings to share soon, so be sure and subscribe to Ford Authority for more Ford Bronco news and continuous Ford news coverage.