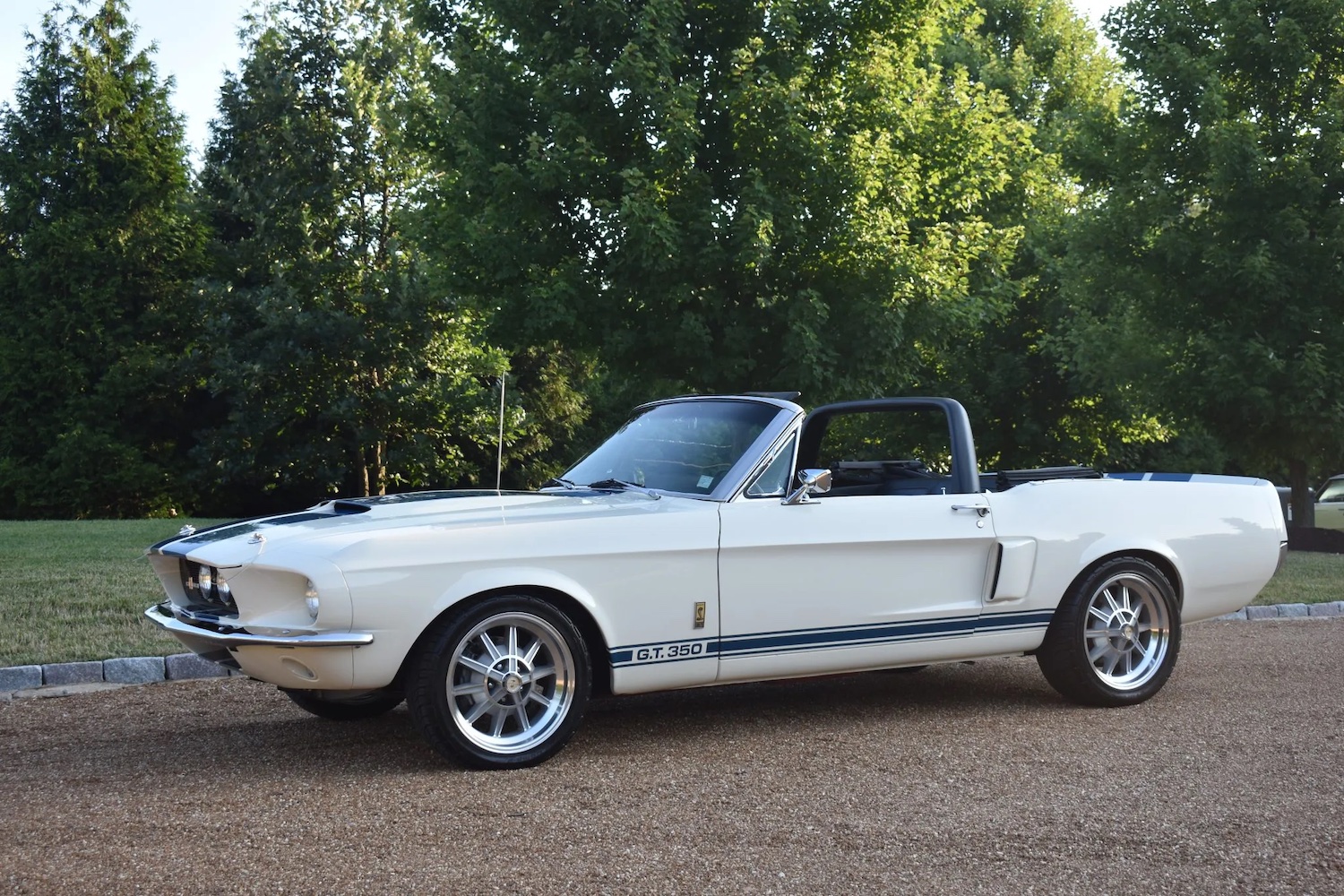 Early Ford Mustang Shelby models are – and always have been – favorites among both enthusiasts and collectors alike, but for those that don’t have a hefty amount of money in the bank, are generally unobtainable. That’s precisely where tribute cars come into play – vehicles made to look just like something like a Shelby GT350 or GT500, albeit without the hefty price tag or historical prominence. That also figures to be the case with this very nice 1967 Ford Mustang GT350 tribute convertible that’s currently up for grabs at Bring a Trailer, too. 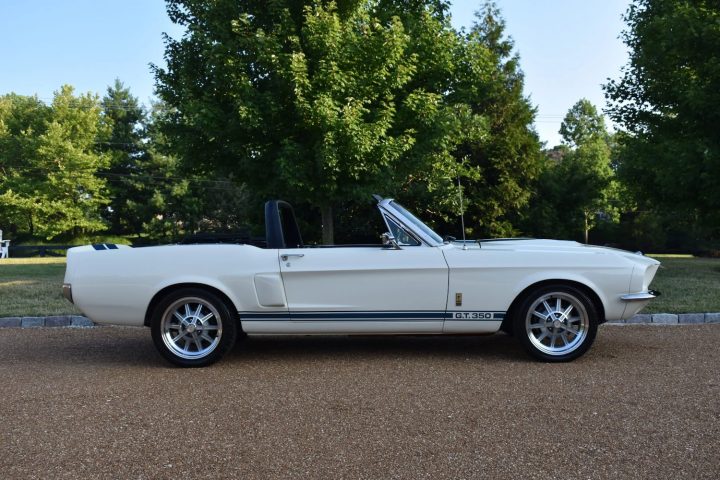 This particular 1967 Ford Mustang Shelby GT350 tribute is the work of St. Louis, Missouri-based Classic Car Studio Speedshop, which built the car specifically for the TV show Speed is the New Black. It was then sold to the current owner’s father back in 2014, and since then, it’s been treated to a full-blown Shelby conversion in many ways. 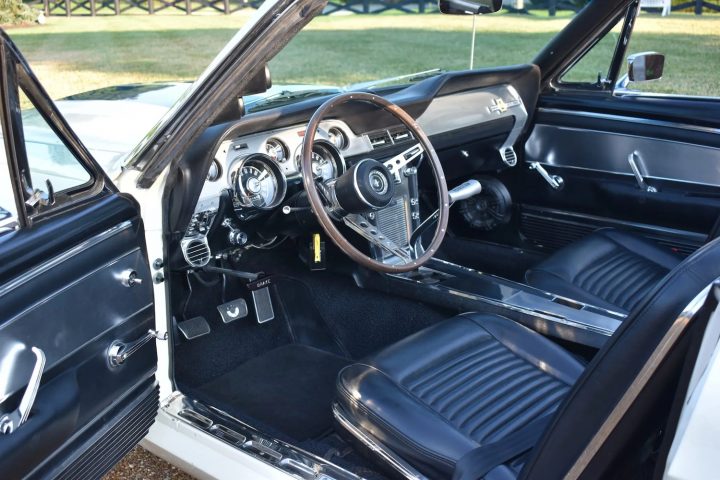 On the outside, that process included stripping the body and repainting it white with blue stripes, as well as installing a Shelby-style front grille, scooped hood, roll bar, rear spoiler, badging, bumpers, exhaust finishers, driving lamps, side scoops, taillamps, and 17-inch wheels wrapped with BFGoodrich g-Force Comp-2 tires. The interior has been redone as well, with new black vinyl, a Hurst T-handle shifter, and a retro-style radio. 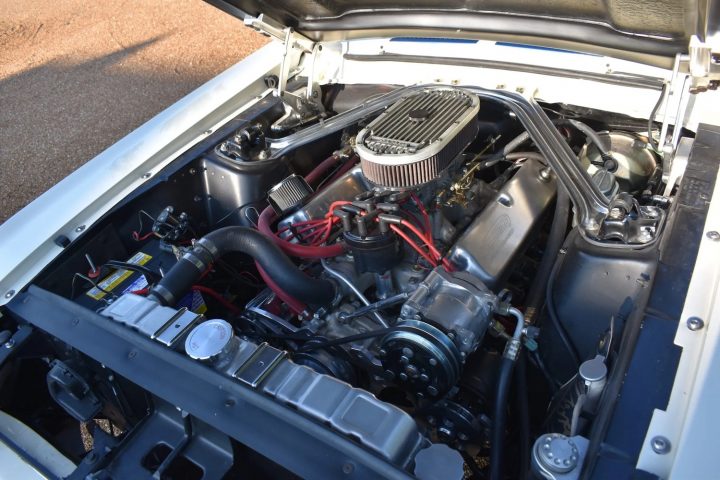 Under the hood, this Shelby tribute features a 347 cubic-inch V8 equipped with a Holley four-barrel carburetor, an Edelbrock intake manifold, an MSD billet distributor, Air Flow Research cylinder heads, an aluminum radiator, and dual exhaust. It sends power back to the rear wheels via a Tremec five-speed manual transmission. 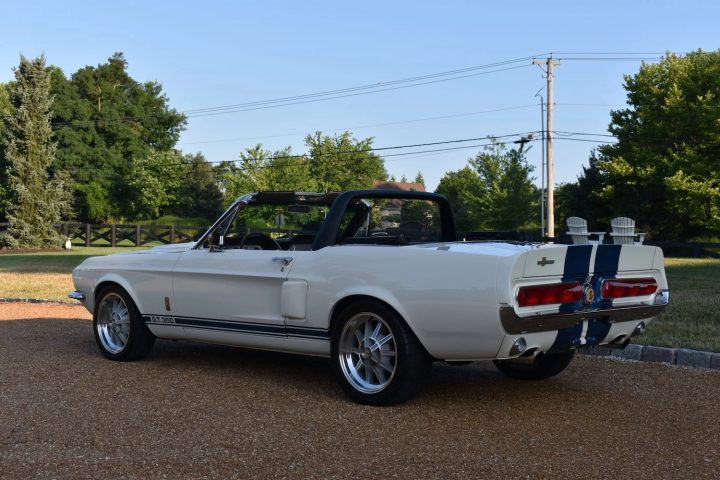 While it isn’t without its flaws, this very nice GT350 tribute looks fantastic, and aside from Shelby enthusiasts, many people would never know that it isn’t the real thing. And even though there are quite a few days left in the auction, it’s pretty much safe to assume that it will sell for far less money, too.

We’ll have more cool auction finds like this to share soon, so be sure and subscribe to Ford Authority for more Ford Mustang news and around-the-clock Ford news coverage.