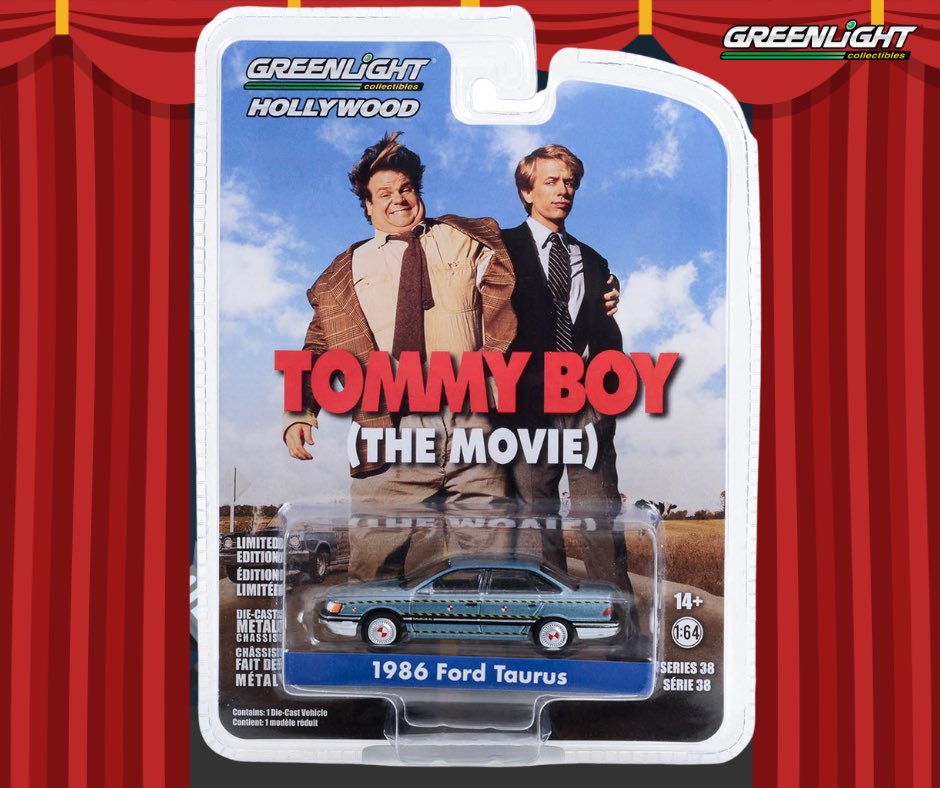 Over the years, a large number of Blue Oval models have been immortalized in die-cast form, many of them from the likes of Hot Wheels and Matchbox. However, in recent years, more die-cast companies have emerged, churning out cool replicas of more specific versions of all different kinds of vehicles – such as the brand new Ford Mustang Mach-E GT police pilot vehicle recently revealed by Greenlight Collectibles. Now, that same company has also unveiled another cool collectible – a replica of the 1986 Ford Taurus from the movie Tommy Boy.

(1/2) We’ve got more Hollywood on the way, this one with a major focus on our new licensee, Yellowstone!

This 1986 Ford Taurus 1:64 scale die-cast model is a rather faithful replica of the one used in a pretty hilarious scene from the movie where Rob Lowe gets stuck on the hood of the car – which is being used for a crash test – and goes for a bit of a ride on the hood before taking a rather painful shot to the groin area. However, it is interesting to note that in the movie, the Taurus is finished in silver, while the die-cast replica is painted blue.

Of course, there are even more obvious tie-ins between this movie and the Taurus that stars in it. After all, Tommy Boy is also one of the late Chris Farley’s more notable movies, and he happens to be the cousin of current Ford CEO Jim Farley. As for the 1986 Ford Taurus itself, the iconic sedan revolutionized the automotive industry by introducing the mid-size, front-wheel drive sedan to the world, which soon because a massive hit before crossovers and SUVs took over.

As such, this new 1986 Taurus die-cast isn’t the first time a company has immortalized the legendary model in this type of format – there are a host of others already on sale, including this “Some Of Our Best Advertising Isn’t Advertising” model, the “Black Bandit” police model, a Utah Highway Patrol replica, and another that comes complete with a salesperson.

We’ll have more cool die-cast models to share soon, so be sure and subscribe to Ford Authority for more Ford Taurus news and continuous Ford news coverage.