Though it isn’t officially available in police spec, the Ford Mustang Mach-E has undergone testing in a variety of places for that specific purpose as many law enforcement agencies explore the possibility of going all-electric in the coming years, whether that be by choice or mandate. Now, the very first Ford Mustang Mach-E GT police pilot vehicle is being immortalized in die-cast form by Greenlight Collectibles, which just revealed the new 1:64 model. 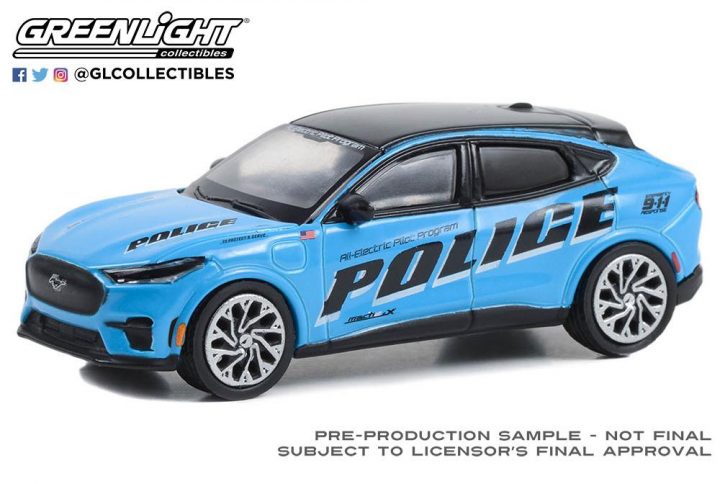 Thus far, Greenlight has only provided us with a couple of sample photos of the one-off Ford Mustang Mach-E GT police pilot crossover, but as we can see, it features some impressive detailing. The blue EV is wearing the same livery as the real thing, as well as a black roof and some wheels that aren’t quite the same design as its running and driving counterpart.

Back in September of 2021, the Michigan State Police (MSP) announced that the Mach-E police pilot vehicle had passed the department’s tests, becoming the very first all-electric vehicle to do so. The tester features the GT’s powertrain, which consists of dual permanent magnetic motors, including an upgraded secondary electric motor that powers the front wheels for a combined output of 480 horsepower and 600 pound-feet of torque. Ford projects that the Mach-E GT will do 0-60 miles-per-hour in 3.8 seconds.

Last August, the Mach-E pilot vehicle joined the Dearborn Police Department’s fleet as Ford seeks to obtain data in real-time to study how the vehicle performs in day-to-day operations as part of law enforcement. Ford Authority later spotted the EV crossover driving around that particular part of Michigan,  previewing a sight that’s likely to become more and more common around the globe as police departments continue to explore an all-electric future.