The EcoBoost 2.3L is a turbocharged four-cylinder engine from Ford Motor used to power compact, midsize and full-size cars, pickup trucks and utility vehicles, or more commonly known as CUVs and SUVs. Featuring a dual overhead cam (DOHC) design, in an inline configuration, the Ford EcoBoost 2.3L architecture is derived from the Mazda L engine and has been part of the Ford EcoBoost family of turbocharged engines since 2015.

This engine was first used to power the 2015 Lincoln MKC, the same year the EcoBoost 2.0L engine was updated. In fact, both engines are very similar in design. For instance, bore size and deck height are identical. However, the EcoBoost 2.3L engine utilizes a forged steel crankshaft with a larger stroke (94 mm vs 83.1mm), as well as shorter connecting rods and exhaust valves (30 mm vs 28 mm). Just like the revised EcoBoost 2.0L engine, the Ford 2.3L EcoBoost is equipped with a twin-scroll turbocharger. It powers the following vehicles:

Discuss the Ford 2.3L EcoBoost engine in our Ford forum. 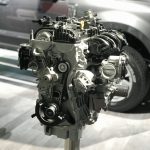