The Nano is a 2.7-liter, twin-turbocharged V6 engine from Ford Motor used to power midsize and full-size cars, trucks and utility vehicles, or more commonly known as SUVs. Featuring a dual overhead cam (DOHC) design, in a V configuration, the Ford 2.7L EcoBoost Nano architecture has been part of the Ford EcoBoost family of turbocharged engines since 2015.

The Nano was first introduced in the 2015 F-150, marking a new era of turbocharged engines at Ford. It also proved that a light duty truck could be powered by a forced induction engine, all while helping Ford meet its fuel economy and emissions standards.

In 2018, the engine saw several revisions, such as the addition of port fuel injection, a new lightweight cam to save weight as well as a stronger dual-chain cam drive system. The engine also received a new electrically actuated wastegate for more accurate control of turbo boost, a high-pressure exhaust gas recirculation system, and a variable-displacement oil pump to better modulate oil flow and reduce parasitic losses. The Ford 2.7L EcoBoost Nano engine powers the following vehicles: 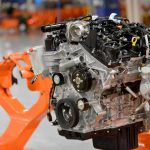 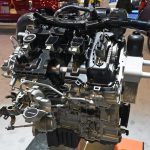