The Coyote is a 5.0 liter, naturally aspirated V8 engine from Ford Motor used to power sports cars like the Ford Mustang and pickup trucks like the Ford F-150. Featuring a dual overhead cam (DOHC) design, in a V configuration, the Ford Coyote architecture has been part of the Ford Modular family since 2011. The engine has seen some revisions since then, the most recent being in 2018.

This engine was first engineered for the Mustang GT so it could compete with the GM 6.2L LS3 engine used in the Chevrolet Camaro at the time. The Coyote had to remain the same size as the outgoing 4.6-liter V8. It was also Ford’s first implementation of its Twin independent Variable Cam Timing (Ti-VCT) technology on a V8 engine, a feature which considerably improves fuel economy and power delivery all while reducing emissions. The Ford 5.0L Coyote engine powers the following vehicles:

Discuss the Ford 5.0L Coyote engine in our Ford forum.

Follow our coverage of Ford Mustang and Ford F-150 news. 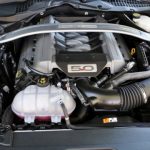