The Lion is a turbocharged 3.0-liter 60-degree angle diesel V6 from Ford Motor used to power midsize sedans, sport utility vehicles (SUVs) and light duty pickup trucks like the Ford F-150. Featuring a dual overhead cam (DOHC) design, in a V configuration, the Ford 3.0L Lion architecture has been part of the Ford Power Stroke engine family since 2018, but was first sold in Australia in 2005.

This engine was developed specifically for light duty truck applications in order to compete against the Ram EcoDiesel engine and the GM Duramax 3.0-Liter I-6 LM2 engine.  However, while new in North America under the Power Stroke name, it is a direct evolution of the Ford Lion engine sold in Europe as part of a joint venture with PSA Peugeot Citroën, also powering some Jaguar and Land Rover vehicles worldwide. While mechanically similar to its European brethren, Ford claims the variant used in North America is unique and adapted for truck duties.

One of its key characteristics is a graphite iron construction and cast aluminum cylinder heads for reduced weight. It also features a forged crankshaft with specific rod and crank bearings and a variable-geometry turbocharger, as well as a Bosch-sourced 29,000 psi common-rail direct injection fueling system, similar to the one found in the larger 6.7L Scorpion. The Ford 3.0L Power Stroke Lion engine powers the following vehicles: 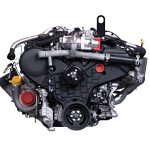 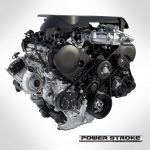