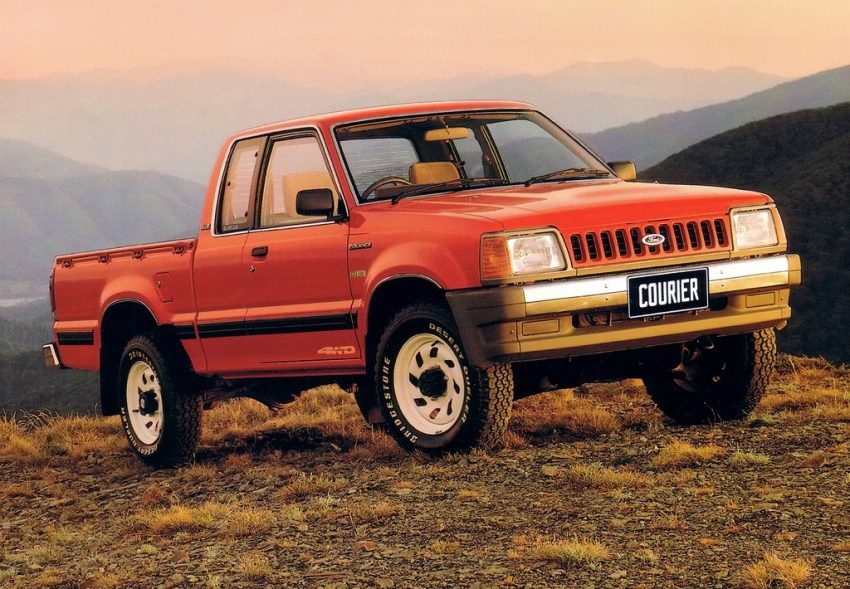 Ford Courier is a line of pickup trucks produced by the Ford Motor Company and marketed under its namesake Ford brand.

The Courier originally entered production in 1952 as a delivery variant of one of its sedans. The model was made until 1960. Thereafter, the Courier name was shelved for 12 years before resurfacing in 1972 as a small pickup truck made in collaboration with Mazda and sold in the U.S., Canada, Australia, and New Zealand. That model went through four generations until being discontinued in 2007. Another Ford Courier model, completely unrelated to the model sold in the Americas, was introduced for Latin American markets in 1998 and was discontinued in 2013.

The Courier name was expected to make a return for the 2022 model year as a compact pickup to be sold globally, however that vehicle will be named Ford Maverick instead.

The first Ford Courier pickup was introduced in North America for the 1972 model year. It was derived from the second-generation Mazda B-Series imported from Japan.

By introducing the Courier, Ford became the first American automaker and automotive brand to market a compact pickup. GM responded almost immediately with the Chevrolet LUV, made in alliance with Isuzu. Chrysler followed suit with the Dodge D-50 made in collaboration with Mitsubishi. Both GM and Chrysler followed Ford’s formula for their offerings by partnering with Japanese automakers for their small pickups.

Four generations of the Courier were made via the Ford-Mazda alliance, running from 1972 to 2007. The vehicles were primarily sold in North America, Australia and New Zealand. However, only the first two generations were marketed in the American market – through the 1982 model year, a year before the introduction of the first generation Ford Ranger. The second Ford Courier pickup was a smaller model based on the four-generation Ford Fiesta. It was and manufactured by Ford’s subsidiary in Brazil. The subcompact Ford Courier had a unique and extensive run lasting 15 years from 1998 to 2013. It was marketed in several countries in Latin America such as Brazil and Mexico, as well as in South Africa, under the Ford Bantam nameplate.

This model was available in Europe as the Ford Courier Van.

Discuss the Ford Courier in our Ford forum.