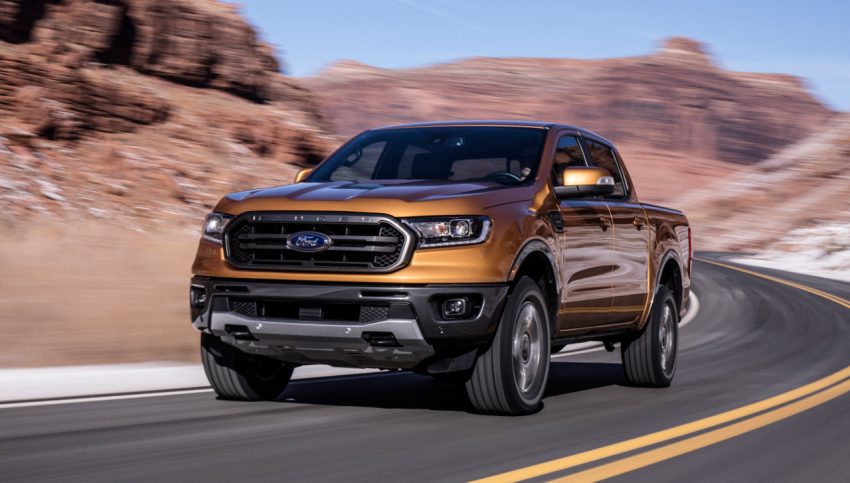 The 2019 Ford Ranger is a mid-size pickup truck sold by Ford Motor Company. The 2019 model year marked several key stages for the Ranger, including:

The last Ford Ranger produced for North America was produced at Ford’s Twin Cities Assembly plan in Minnesota on December 22nd, 2011. This model was first a compact and then a midsize pickup truck that spanned three generations across the 1983 – 2012 model years.

The first indicator that Ford was planning to bring the Ranger T6 to North America came in 2015, when Ford Motor Company and the United Auto Workers (UAW) union signed an agreement for Ford’s Michigan Assembly Plant in Wayne, Michigan. As part of the agreement, the factory would undergo a $700 million retooling and see Ford replace production of the Ford Focus and Ford C-Max vehicles made at the plant at that time with the Ford Ranger and an SUV variant, the Ford Bronco.

In the U.S. and Canada, the 2019 Ford Ranger was offered as a mid-size pickup truck in either SuperCab or SuperCrew configurations. A two-door version will not be available in North America, though such a cab is available in international markets.

An SUV variant of the 2019 Ranger will be available as the new 2021 Ford Bronco.

The 2019 Ford Ranger rides on the Ford T6 platform shared across the following vehicles:

Besides making the adaptations to the Ranger’s T6 platform for the U.S. and Canadian markets (see Platform section), Ford also made the following changes to the Ranger:

The 2019 Ford Ranger is powered by a proven 2.3-liter EcoBoost inline four-cylinder gasoline engine mated to the new Ford 10-speed automatic transmission, the only 10-speed automatic gearbox in the segment. Though the engine is used elsewhere in the Ford vehicle line with different power outputs, its power production in the 2019 Ranger lands at 270 horsepower and 310 pound-feet of torque.

Ford’s all-new 2.0L Bi-Turbo diesel engine did not make an appearance in the 2019 North America-market  Ranger lineup, but is expected to become an option in the future. In the International-market Ranger, the all-new engine is mated to Ford’s 10-speed automatic transmission, with the powertrain combination being rated at 211 horsepower and 369 pound-feet of torque.

Both two-wheel-drive (sending power to the rear wheels) and four-wheel drive models are available.

The 2019 Ranger competes against other mid-size mainstream pickup trucks, including:

The 2019 Ranger will be offered in the following trim levels in the United States: Highlights of the Ranger Raptor include:

For says that the Ranger Raptor has been tested in the world’s toughest conditions to deliver an unrivaled off-road package that astonishes and excites drivers. The international-market 2019 Ford Ranger Raptor was announced on February 7th, 2018 in Bangkok, Thailand.

The 2019 Ranger is assembled at the Ford Michigan Assembly Plant in Wayne, Michigan, USA.

For markets outside North America, the 2019 Ranger is assembled at the Ford Thailand Manufacturing (FTM) in Rayong, Thailand.

Discuss the 2019 Ford Ranger in our Ford forum.