Anyone with a fortune large enough to own the full lineage of the Ford GT will want to be registered to bid at the RM Sotheby’s auction during Monterey Car Week 2019. The auction house has put together what it calls the “full Ford GT lineage” for sale at the event. The cars set to cross the auction block include a 1965 Ford GT roadster prototype, a pair of 2005 Ford GTs, and a new 2017 Ford GT.

RM Sotheby’s global head of auctions, Gord Duff, says that it is “hugely significant” for the auction house to have all these cars together for sale in Monterey. Duff says that the cars tell the legendary racing history of Ford and that all three models are desirable to American or motorsports collectors. The Ford GT line includes a 1965 GT40 roadster prototype chassis GT/108 that was the 8th of 12 prototypes made and the first of five roadsters. The car at the auction is the only roadster to survive in its original form. This car was driven by Carroll Shelby, Ken Miles, and Jim Clark. Pre-auction estimates for the 1965 GT40 roadster are for $7 to $9 million.

The auction includes a pair of 2005 Ford GT cars with one in Centennial White with blue stripes with 1,300 miles on the clock. The other is Midnight Blue and has under 100 miles on it. Each is expected to bring about $300,000. Neither of these cars is as low-mileage as the 2006 we saw earlier this month with less than 12 miles on the clock.

The last of the Ford GT cars is a 2017 Ford GT said to be the only one in Beryllium Orange. It has carbon fiber wheels and has less than 400 miles on it. The car is estimated to be worth $1.2 million to $1.5 million. To round out the offerings is a Ford Mini GT made by SCAF of France. This car has been restored and is designed for kids 7 to 12 years old to operate and is eligible for the Little Big Mans race at the Le Mans Classic vintage racing weekend. It is expected to fetch $25,000. 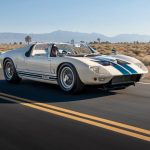 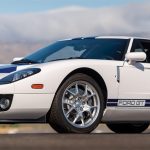 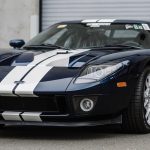 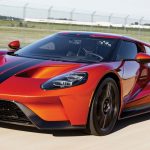 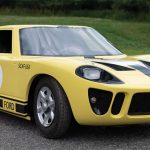